Too many elderly patients in a social crisis end up in hospital. In Nottingham, GPs can instead call on the British Red Cross to support them. By Daloni Carlisle 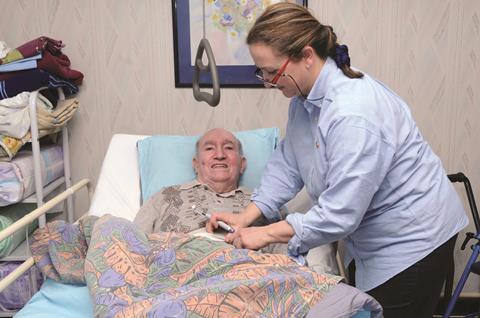 The problem with health and social care crises is that they require a rapid response. In many areas, the only really rapid response available is hospital.

Not in Nottingham, though, where commissioners at Nottingham North and East, and Nottingham West clinical commissioning groups have worked with the British Red Cross to develop the Crisis Intervention Community Support Service. It aims to prevent admission to hospital or respite care by providing short, targeted interventions.

Last year just over three-quarters of the people referred to the service avoided an admission. This added up to 748 admissions avoided, saving the two CCGs a combined total of nearly £1.5m.

The service is known locally by its acronym, CICSS, pronounced “kicks”, says service manager Ruth Beedel. It has been running since 2010.

Do not ignore those in crisis

“Our main theme at British Red Cross is refusing to ignore people in crisis,” she says. “It doesn’t matter what size that crisis is, it is what matters to the person.

“So the idea of CICSS is to put in some support very quickly for a short period of time to help people over a difficult period and either help them return to independence or give their GP time to set up a package of ongoing support.”

The service is available to anyone over the age of 18, although in reality the client group is overwhelmingly 65-plus. “We had one lady of 102,” says Ms Beedel.

When any of the GPs in the two CCG areas identifies someone who is struggling and for whom a short package might prevent an admission, they call a central hub run by community provider Nottinghamshire Healthcare County Health Partnerships (see box below).

‘The response is rapid rather than emergency’

“Most of our referrals come from GPs but we do also get them from pharmacists, who are worried about medication, and from physios and [occupational therapists],” says Ms Beedel.

The service does not take referrals of people who have been in hospital more than 24 hours with one exception – the Lings Bar rehabilitation hospital – as there is a Home from Hospital service to support them.

The hub collects some basic information and refers on to CICSS, where coordinators take the case before making contact with the potential service user.

“We call to say that the GP thinks you might want some help and ask if we can come to make an assessment. If they say yes, we go and see them in their home,” she says.

More than 90 per cent accept the offer.

The response is rapid rather than emergency, says Ms Beedel. GPs can ask for patients to be seen within the hour and very often that is possible; more usually, first contact is within 12 hours.

“We find it really helps if a relative or friend can be there for the assessment visit,” says Ms Beedel. “The service users do not know us and it is important they feel safe.”

Mr W was 84 and at home, receiving palliative care for terminal cancer when his health deteriorated rapidly. The district nursing team called in CICSS to provide 48 hours of care while they set up a care package.

CICSS visited him three times a day, helping with personal care safely, comfortably and with dignity. The healthcare assistants were able to alert the district nursing team to an area of soreness and prevent it getting worse.

When the care package was delayed because paperwork did not arrive in time, CICSS extended its support.

A week later, CICSS handed over care. Mr W stayed at home comfortably and was surrounded by his family throughout.

CICSS also supported 82-year-old Mrs P, who was in poor health and living alone with some support from her son. She was referred to the service by her GP after a visit to accident and emergency for help with personal care needs.

The team visited every morning to help her wash, dress and have some breakfast. They also helped make her environment safe – for example, by having a key safe fitted so she did not need to go to the door when her son was not present.

They referred her to the Department for Work and Pensions for financial advice. Meanwhile, social services informed CICSS that they were not able to provide support for Mrs P.

The GP and CICSS pressed the case and eventually a care package of morning and evening visits was commissioned but not until 30 days after the initial referral. CICSS continued to support Mrs P throughout.

The team doing these visits consists of 12 healthcare assistants. The minimum requirement is NVQ level 2, although in practice they are all either at or working towards level 3. They cover two shifts – 7am to 3pm and 3pm to 10pm – 365 days a year.

“At the initial assessment we look at the whole picture to try to understand what the service user wants, what they understand about our service and what we can offer,” says Ms Beedel. “We ask what they want to achieve and usually that is something like they want to be independent again or to do their shopping on their own or to be how they were before they got ill. Then we have to unpack that a bit and work out how to achieve it.”

Sometimes it is daily activities, helping the service user to prepare meals or prompting them to take medication. “I could be helping them to mobilise more effectively,” says Ms Beedel. “It’s not rocket science but it needs very special people to do it effectively and we have some wonderful HCAs.”

‘We try to build resilience into the team, as well as enhanced skills’

These are “level 1” service users whom CICSS can support for 14 days.

More and more frequently, though, service users require help with personal care – toileting and washing. These are “level 2” service users who can receive seven days of more intensive help.

The HCAs report back to the coordinators after this initial assessment and put together a schedule of visits. The service keeps GPs informed along the way.

“That means the GPs are aware and they can mobilise other services,” she explains. “We are a bit like the eyes and ears of the GP. We see their patients regularly.”

They also signpost service users to other organisations that might help and liaise with GP, community and social services about ongoing support.

Like the NHS, CICSS is seeing rising levels of dependency and complexity, including early signs of dementia, people needing end of life care and those with high body mass index. Recently, commissioners have asked CICSS to accept referrals of patients assessed by GPs as at high risk of admission – adding again to the complexity of work.

The CCGs have provided additional funds and CICSS is responding with training to support the HCAs. “We are trying to build some resilience into the team, as well as enhanced skills,” says Ms Beedel.

Guy Mansford, clinical lead for Nottingham West CCG and a partner at the Oak Medical Centre in Beeston, says CICSS is quite simply “brilliant”.

“It’s really raised our expectations of what can happen,” he says.

“In the past we would see someone not coping at home and we might make a referral to social services who might say they could see them in two weeks if we were lucky. There was no assurance and often we would end up admitting them to hospital.

“Now I can call CICSS and know that someone will be there within the hour. I can tell the patient and be sure that it will happen. They are as responsive as we are.”

His only worry is that CICSS may end up filling the gap left by social services rather than provide the crisis response it was commissioned to offer. “We have to hold social services to account,” he says.

Candice Lau, senior service improvement manager at Nottingham North and East CCG, says the feedback from providers and users is excellent and that CICSS fills a real gap. The fact that the service is Care Quality Commission regulated provides an added layer of assurance about quality, she adds.

It costs the combined CCGs just under £250,000 a year to run and on paper this is value for money – with just under £1.5m saved through avoided admissions. However, she would like to evaluate this more closely. “It’s always very difficult to allocate savings exactly,” she says.

Certainly CICSS is adding value not just for service users but also the NHS locally and it is, says Ms Lau, a transferable model. “The Red Cross is very experienced at running these sorts of crisis services,” she says. “This is a service that other CCGs could do well to look at.”