Commissioning supplement: The right services at the right time

After a successful initiative to reduce overflow in A&E last winter, the voluntary sector is all set to provide social support for patients, writes Daloni Carlisle 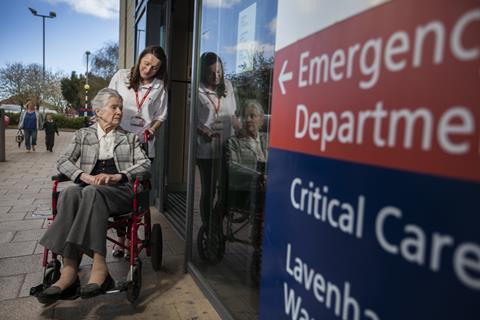 Early this year overflowing accident and emergency departments became a real problem. Now that winter is just around the corner, it is worth looking back at one of the ways this issue was addressed - with support from the voluntary sector.

The British Red Cross was one of three charities awarded a total of £1.2m in a special initiative funded by the Cabinet Office, developed in partnership with the Department of Health, NHS England and chief executives of the Red Cross, Age UK and the Royal Voluntary Service. The aim was to get the flow of patients moving by making sure those who needed an “arm around the shoulder” could get home or stay at home safely.

Sue Collins, head of independent living for the Red Cross, recalls: “I had been a member of a voluntary and independent sector consortium working with Monitor for the whole of 2013-14 looking at winter pressures and what we had to offer [and] how we could work more collaboratively with the NHS.
“Then in January 2015 hospitals were declaring major incidents and closing their emergency department doors. We were called, with others, to a meeting of chief executives with cabinet secretary Jeremy Heywood to discuss a plan.”

More from this commissioning supplement

This plan involved declaring 29 (later 30) “hot spots” where NHS trusts were struggling with patient flow. The idea was to put in social support from the Red Cross, Age UK and Royal Voluntary Services to get things moving. All three already work in hospitals and communities, supporting patient flows. For example, in 2014 the Red Cross reached 74,500 people with its support at home services. All three were ready to scale up quickly to provide additional services.

Support provided by the three charities include:

Together, they agreed to provide 700 volunteers for 12 weeks (subsequently extended to 14) to deliver social support in three ways: at home or in A&E to prevent unnecessary admissions, and on the ward to support early discharge home of patients who did not need a bed for medical reasons. Within two weeks of agreeing the plan, the three charities had staff and volunteers in place and providing the support.

Nanette Charville, Red Cross operations manager in Cambridgeshire, Suffolk and Norfolk, was on the front line. The Red Cross took the lead at Peterborough Hospital while Royal Voluntary Service took the lead at Addenbrooke’s Hospital – the two local hotspots. “We already had a home from hospital service at Peterborough Hospital,” she says. “So we already had a working relationship with the hospital.”

The first task was to meet with contacts at the hospital and decide the way forward. “We spoke to discharge managers who told us their main problem was discharging patients over the weekend. We felt we could help by offering support to help patients who need low level support to settle at home.
“We proposed a service running Friday, Saturday and Sunday, based in the hospital. The trust agreed to provide some office space alongside the discharge teams and social workers and to publicise the scheme throughout the hospital.”

‘Over 12 weeks the three ladies who worked with us helped 105 people, spent 420 hours on home visits and carried out 372 supporting tasks’

Ms Charville quickly mobilised a manager who was working in an existing local Red Cross scheme and two paid workers, as the service was likely to be time limited. The Red Cross team worked closely with the discharge team to identify patients who might need “an arm around the shoulder” as Mary Bird, lead nurse for discharge planning at Peterborough Hospital, puts it.

Ms Charville explains the type of help her team was able to offer. “We were insured to take people home by car and make sure they were settled in – turning on the kettle, making them a sandwich, turning on the heating, make sure there is food in the fridge, that kind of thing.” The support could last up to 72 hours. 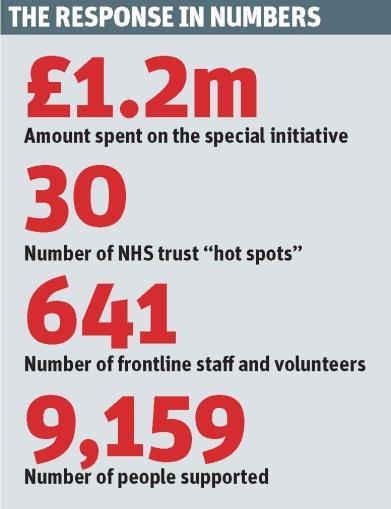 Her team felt very welcomed by the hospital – right from the chief executive who made his support public, through to the communications department who managed internal publicity material and the ward discharge managers who welcomed them with open arms.

“The three ladies who worked with us were just lovely,” says Ms Bird. “They were all round the wards saying, ‘how can we help?’, and were a pleasure to work with.”

She feels they made a real difference – not just to individuals but also to the hospital as a whole. “I’ve just looked at the evaluation and over 12 weeks they helped 105 people, spent 420 hours on home visits and carried out 372 supporting tasks.

“We are a big hospital and 105 patients might not seem a massive amount but these are all people going home over the weekend when, as any bed manager will know, just three or four extra beds makes a real difference.”

Would she welcome them back for winter 2015-16? With open arms, she says. Ms Charville would love to make the service more sustainable. “Once it took off it really gathered momentum,” she says. “We did a similar scheme over at King’s Lynn Hospital. It was not a hotspot but they saw what we were doing at Peterborough and saw the value. We already had a hospital at home scheme there so we were able to upscale quickly.”

Commissioners agree that this is a service worth the investment. In June NHS Cambridgeshire and Peterborough Clinical Commissioning Group agreed to fund it again for five months over winter 2015-16. Tracy Dowling, chief operating officer for the CCG and chair of the Peterborough Systems Resilience Group, says: “The Red Cross scheme was very effective last winter in providing extra support to the hospital in discharging patients, and was well liked by patients. The SRG was keen to continue this scheme this year, and has made funding available from its operational resilience funding.”

Nationally, the initiative exceeded its target of helping 8,862 people – the final total was 9,159 and nearly 500 volunteers joined the scheme. The Cabinet Office has reviewed a national evaluation report and plan to run “lessons learned” workshops this month. Ms Collins met with NHS England chief executive Simon Stevens to discuss them.

One of these is debunking myths about the voluntary sector. Ms Collins says: “The historical divide between health and social care means that not everyone in the NHS is used to working with the voluntary sector and there have been times when, for example, we have had to reassure the hospital that all our volunteers are fully trained and Disclosure and Barring Service checked.

‘We would like to approach this winter in a planned way. We are much more business ready now’

“Debunking myths about the voluntary sector is a major part of the cultural shift we need to see if future such collaborations are to be successful.”

In one or two trusts, the message that the charities were there to help did not seem to have filtered down from chief executives to front line discharge managers, she adds. The result was that the services were slower to get going than might have been the case with better communication.

Now the Red Cross wants to get services commissioned sustainably. Winter pressures funding allows the charity to scale up its support to A&Es during a particularly busy period, but ultimately these schemes should be seen more as a core part of patient care.

“Last winter we were highly reactive,” says Ms Collins. “We would like to approach this winter in a planned way. We are much more business ready now.” To a degree this is happening already. Witness the new contract in Peterborough – other CCGs are considering similar proposals. Last winter’s experience led five trusts to create a partnership with the Red Cross to support patient flows.

This will not be the last time A&Es across the UK face increased pressures, and it is likely there will be a need for similar support again. With preparations for winter 2015-16 already underway, will this year prove to be the year when early collaboration between the NHS and charity partners finally changes the record on winter pressures?

Commissioning supplement: The right services at the right time