Watch and learn: what the NHS has got to learn from other industries

It’s all too easy to assume that working methods that are successful in other industries may not be applicable to healthcare but, just as with people skills, some systems are transferable, says Matthew Shelley 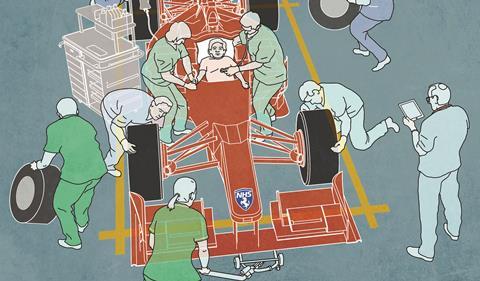 Increasingly, the health service is being urged to tap into other sectors for fresh ideas on how to generate innovation and change.

In April NHS England chief executive Simon Stevens summed up his vision for the service by saying: “The NHS needs to become the best at harnessing the best, whether spreading good ideas from within, learning from other industries, or cherry picking from other countries.”

One company in particular believes the way it turned around its business could be a valuable lesson for a challenged NHS. When Unipart, a major manufacturing and logistics company which employs 8,000 people, faced a “do or die” situation, it was able to make changes that almost completely eliminated customer dissatisfaction.

But how much can really be learned from other industries? Just because something works elsewhere does not necessarily make it right for healthcare.

Mr Stevens’ vision is not about “cutting and pasting” methods from elsewhere, insists Amanda Molloy, head of healthcare at Unipart Expert Practices. Instead, a distinctive approach is needed. “Our advice to the NHS is to work with the best, but to find its own way of doing things,” she says.

That is exactly what Unipart did in its darkest days, and now it is a global evangelist for continuous improvement through staff engagement.

Ms Molloy reflects: “We had to change to survive. We had one customer - who wasn’t happy - and a workforce that was disengaged. So we started to look at the best in the world - companies like Toyota and Honda. No one organisation did it all, so we learned from them and then created a complete system of our own.”

‘The NHS cannot afford to ignore outside influences’

The result was a process of continuous improvement known as the “Unipart way”, which was rolled out across the business. This is now spreading far beyond, via its Expert Practices consultancy business. Unipart’s emphasis is now on developing the right skills within an organisation to bring about transformational change, while engaging the workforce.

Ms Molloy is acutely aware that within the NHS there are many grand organisational development programmes run by outside experts that wither away. This is because they are unsuitable and fail to take root in the minds of employees or the culture of the organisation, she says.

Ms Molloy has seen great examples of excellence within the NHS, but argues that improvement must be everyone’s responsibility and this needs to be in the organisational DNA.

For this to happen it is essential to:

“[The process] is not an add-on, it’s the essence,” explains Ms Molloy. “It starts with induction, it’s built into contracts and is a part of daily experience and practice. We put a great deal of work into creating a culture where people really believe that the company is not afraid of problems and challenges but seeks them out in order to improve.”

She recalls a warehouse visit by 15 NHS executives who went away “buzzing” after meeting frontline staff and their sense of purpose.

One obstacle, Ms Molloy has found, is the misconception that radical approaches from elsewhere will not work for them.

‘Our advice to the NHS is to work with the best, but to find its own way of doing things’

“We took the ‘Unipart way’ into logistics and they said it wouldn’t work there because they were different [to manufacturing]. But it did. The fact is, I have never found a service or an industry where it doesn’t work.”

Deborah Feakins, outgoing head of the Change Management Institute UK and head of change practice at management consultancy Practicus, also believes when healthcare organisations want to improve, they should look to other sectors, as well as internally, to seek out best practice and successful approaches.

This can involve learning directly from other industries or calling on third parties that have been involved in change in the NHS and other sectors.

“You don’t always need to bring in external help, but it can be a real benefit,” she says. “You may want to use mixed teams, but sometimes external people have direct experience of the type of change you are trying to bring about, which is not always available within the organisation.”

Ms Feakins understands there are some very specific issues facing anyone proposing change in the NHS. These include huge levels of public scrutiny, potential risk to patients and lambasting from the media when things go wrong, not to mention the risk of sudden shifts in government policy.

Nonetheless, the potential is vast and change is becoming the norm in all sectors. It has to be embedded into everything organisations do.

This, says Ms Feakins, has been understood by successful businesses operating everywhere from pharmaceuticals to oil and gas. In looking to other industries, certain things might simply be replicated, but more often it is about developing new approaches to get the best from staff.

Looking elsewhere is often about unlocking latent potential, she adds.

“The NHS is full of innovative, talented and committed people who really want to achieve things. If we can’t find ways for people who are this motivated and caring to bring about change, then there is a serious problem.”

Ms Feakins suggests a three pronged approach for NHS leaders to branch out in their efforts to bring about change:

Taking a step back, the issue is ultimately not about the NHS taking lessons from elsewhere, but to encourage a more open approach in every part of our economy, she adds.

“Right now, there are all sorts of industries and areas talking to each other, often with apparently little in common,” Ms Feakins says. “But when they start talking, they realise how much they have to learn from each other.”

Emma Stanton, psychiatrist and chief executive of mental healthcare provider Beacon UK, says: “There should be exposure to the value of learning from other industries from an early stage in training. This should be included in induction, education and training, as well as ongoing professional development. It should also be discussed in supervision and policy forums.”

The induction process is one in which she has a keen interest, citing Aberdeen Group research that shows that 90 per cent of employees decide whether to stay with a company in the first six months, and that high performing employers use that time to win hearts and minds.

Dr Stanton is especially critical of induction for junior doctors, which too often consists of “formal didactic presentations that alienate our valuable workforce before they have set foot on the wards”.

She has suggested looking to the likes of retailer John Lewis for examples of excellence.

More broadly, Dr Stanton believes there is a vital need to build organisational cultures that make the most of staff as agents of change and improvement.

“Complex service industries are most suited for the NHS to learn from,” she says. “What we need most of all are stories that captivate people’s imaginations, stories that inspire people for their work. But, ultimately, these can come from any industry.

“It’s about practice and work and leadership. We need a range of examples, stories and lessons to learn from.”

She points to the way Great Ormond Street Hospital in London studied the incredible choreography for Ferrari’s Formula 1 racing team’s pit stops when it was revamping its system for patient handoffs.

Racing cars were also used as an analogy by US surgeon Atul Gawande when he addressed Harvard Medical School on approaches to healthcare. His argument was that healthcare is moving at an incredible speed and is so complex that every possible source of expertise must be called on to build systems that work for patients.

He told the audience: “By a ‘system’ I mean that the diverse people actually work together to direct their specialised capabilities toward common goals for patients. They are coordinated by design. They are pit crews.”

Part of this must be a willingness to take on unexpected ideas from unlikely sources. While at medical school, Mr Gawande could easily imagine a future where hi-tech robots were used in surgery, but never dreamed that something as mundane as a new checklist would be a game changer. “They turn out, however, to be among the basic tools of the quality and productivity revolution in aviation, engineering, construction - in virtually every field combining high risk and complexity,” he explained.

The message is clear: whether it is coming from Unipart, John Lewis or from US surgeons, the NHS should not ignore outside influences; indeed, it should be seeking them out.