Official mid-year performance figures suggest the NHS provider sector is forecast to end the year with a combined deficit of £669m, which would be £89m worse than planned.

Although worse than the £580m deficit “control total” for the sector, the forecast for 2016-17 is inside the £800m which local commissioners have been made to hold back as a contingency fund in case of provider overspending. 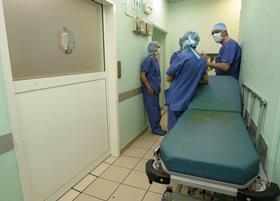 The forecast, released today by NHS Improvement, includes the benefit of the £1.8bn sustainability and transformation fund, so would equate to an underlying deficit of £2.47bn. The report does not mention the £250m deficit “stretch target” for the sector.

Although worse than last year’s reported deficit of £2.45bn, this would be a significant improvement on the underlying deficit in 2015-16, which was thought to be £3.7bn.

However, HSJ has previously reported how trusts’ financial savings are heavily “backloaded” to the second half of the year, meaning there are significant risks still in play.

This is illustrated by the actual year to date deficit, which is only around £70m better than at the same stage last year, once STF is discounted.

Data collected directly from trusts by HSJ earlier this month suggested a year-end deficit of around £850m. However, Jim Mackey, chief executive of NHS Improvement suggested this may have included overly pessimistic initial forecasts from trusts.

For example, in the NHS Improvement report King’s College Hospital Foundation Trust’s outturn forecast is listed as an underlying deficit of £32m (discounting all STF). However, the trust’s mid-year finance report, published on 2 November, gave its year-end forecast as a £50.5m deficit. This was based on the actual position at the end of July. The trust’s year to date deficit is £60m, so the forecast in the board report assumes a major improvement in the final months of the year.

Similarly to last year, major one-off actions may again need to be taken to limit the combined overspend, such as local capital to revenue transfers and other technical accounting measures.

The NHSI report adds that efficiency savings of 2.9 per cent have been achieved in the year so far, against the planned 3.1 per cent.

The year-end savings forecast is 3.9 per cent against the required 4 per cent. This would include a £400m of undelivered recurrent savings, offset by a £278m over-delivery of non-recurrent schemes. This would effectively add another £400m to next year’s savings requirement for the sector.

The report said: “The year to date cost improvement plans achieved was however still £92m short of plan. This was largely due to sustained demand pressures and recruitment difficulties, which were in part offset by providers outperforming on their planned income generation schemes….

“As winter months approach, the challenge to deliver planned trajectories during the remainder of the year cannot be underestimated. Some providers will have to deliver increased levels of efficiency over the next six months of the year to protect their finances and deliver the plan profile.”

NHS regulators have stressed the importance of giving “confidence” to the Treasury that the provider sector finances are on track against plans, with the mid-year performance figures said to be a “very important milestone”.

There will also be significant concerns around the financial position of clinical commissioning groups, whose mid-year performance figures is expected to be published next week.

There are also significant concerns about the financial position of the commissioning sector this year, partly due to the uplift in tariff prices paid to providers.

NHS England is due to publish financial performance data next week, but has said today that a gross overspend of £169m will be reported for the first half of the year. This nets to an underspend of £231m once the half year value of the £800m contingency fund is accounted for.