1
Dawn of the volunteer revolution 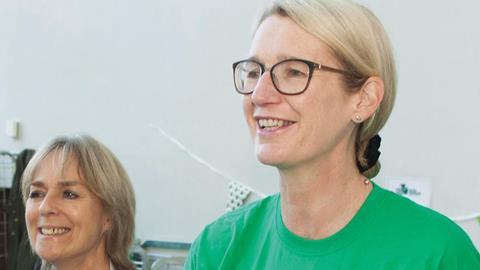 Volunteering needs a ‘rebrand’, if its vital role in delivering sustainable healthcare is to be fully realised, believes the chief executive of Macmillan Cancer Support, writes Daloni Carlisle

Take a moment to think about a typical Macmillan Cancer Support volunteer. Who springs to mind? Probably the cake-making fundraiser or street collector. But while thousands of bakers and tin rattlers are core to Macmillan, they are far from the whole picture.

Today, volunteers are offering peer support and befriending people who are lonely or isolated. They are working as part of multidisciplinary teams and as buddies helping to support discharge of patients with social needs.

They are helping to review patient literature and are involved in formal consultations on the future of health services.

In other words, volunteers are now part of the healthcare delivery team. As Lynda Thomas, Macmillan’s chief executive since March, says: “Volunteers need a rebrand.”

Macmillan is just one of a number of organisations to recognise that if the nation is to meet the challenge of delivering sustainable healthcare services, then volunteers must be part of that future.

’Volunteers are now part of the healthcare delivery team’

In September, Macmillan created a board-level “people director” post – essentially a director of volunteers. And a strategic review is under way that puts volunteers at the core of Macmillan’s work.

Ms Thomas says: “Now is the moment when we need to have a really radical look at what the workforce supporting people with cancer looks like. There is such a strain on the system, with a growing demand in terms of the number of people going through cancer treatment who need support and the number of people surviving with cancer who have really relevant skills and want to give something back.

”We would be mad to ignore the contribution that volunteers can make.”

Macmillan, of course, has always had a strong voluntary streak. It was set up in 1911, despite professional opposition, to provide information – about recognising, preventing and treating cancer – to patients, doctors and the public.

That’s still its mission today but the emphasis has shifted over the years. The 1960s saw Macmillan provide funding for hospices. The 1980s and 90s saw a fundraising drive for Macmillan nurses and doctors, while in the 2000s it was all about developing information sources for patients and carers.

This included the Macmillan Helpline, with expert nurses and financial advisers made available by telephone.

Now, the emphasis is shifting again. Ms Thomas is not talking about withdrawing funding for the 9,000 or so Macmillan nurses, or from the helpline, but about expanding volunteer services.

To take one example, Macmillan now hosts an online community where people affected by cancer support each other. Set up in 2009, it had a slow start but with the spread of broadband and email, the community has grown.

It now has about 100 groups, split roughly between cancer types and cancer experiences, such as bereavement and carers’ forums.

In the first nine months of this year, 7 million people viewed the pages and 75,000 people visited each month. Collectively, users had posted more than 10,000 discussion topics and received more than 60,000 responses.

That’s a lot of questions and answers.

Numbers only ever tell part of a story and here I must confess a personal interest. I turned to the Macmillan online community for support when I was diagnosed with cancer last year and it was a lifeline.

’When you are awake at 3am worrying, someone else is also up and wanting to talk’

When I asked health professionals what I would feel like during chemotherapy, they gave me a long list of terrifying side effects and told me “everyone reacts differently”. It was the women with the lived experience who were able to tell me that a pattern would emerge and that I would be able to plan my life around it.

When I let out an electronic howl of despair, they were there to support me. When I celebrated meeting a milestone, they cheered with me.

I have since trained as a Community Champion, providing online support to others and working with the employed community team, who moderate the site.

Ms Thomas says the power of the community is not just this sharing of experience, but also that it is open all hours. “The community is there 24/7,” she says.

“When you are awake at 3am worrying, someone else is also up and wanting to talk.

“I am amazed at how it has grown,” she adds. “It’s gone way beyond what we expected, not just in terms of the number of people using it, but also in the depth and the level of the relationships people are forming. We have not had our first community wedding but I think it is only a matter of time.”

She believes there is more scope for volunteers to take on these kinds of “light touch” interventions that make so much difference to patients, and which ultimately reduce pressure on the health service. In Sussex, for example, volunteers are now providing clinical teams with practical support, such as getting patients to appointments or readying their homes for return from hospital.

Ms Thomas says: “The clinical teams are asking volunteers to go into people’s homes and switch the heating on or put some milk in the fridge. It’s these practical things that can sometimes make the difference to whether someone can be discharged or not.”

Macmillan has also helped set up the Hull Innovation Centre within Hull City Partnership CIC. It is a medic-led community based palliative care service and recently recruited volunteers to help provide practical support to people at the end of their lives.

Every user has achieved their preferred place of death in the last year – usually at home. Compare this with the national picture of most deaths occurring in hospital.

“Volunteers are a very, very big part of this,” explains Thomas. “Imagine if you could do that nationally.

”It is not just providing what people want, but also avoiding the cost to the system of them dying in hospital. It just feels wrong that we can’t do that more often.”

Elsewhere, volunteers are acting as buddies. In Brighton, a group of Macmillan volunteers provide a befriending service for people with head and neck cancer, for example.

“The treatment is very, very debilitating and people can go for long periods of time without being able to speak. The buddies are there for the people and for their families.

”They have been through it and they know what it is like.

“One of the volunteers is a man who has been clear for 17 years. I see people’s eyes light up when they realise it is possible to live through this.”

Volunteers are helping with some of the things that matter to patients, such as benefits claims. “Whereas before, a patient might have gone to their clinical nurse specialist for help with the form, now they can go to a volunteer,” she says.

At UCLH, volunteers are now part of the multidisciplinary team supporting people with cancer, right from the moment of diagnosis.

“We invested in a new cancer centre at UCLH and part of the deal was not just a beautiful building and amazing treatment, but a completely different model of volunteering,” says Ms Thomas. “They are involved right from the word go.”

All of these models are laudable and perhaps easy to talk up – great for inspirational speaking, but are they safe? And do they work?

Safety is a matter of the utmost importance, says Ms Thomas. “We have a duty to protect both the volunteer and the person with cancer,” she says.

There are some formal requirements, such as criminal record checks for anyone going into people’s homes. Beyond this, there is training and volunteer support.

“We are happy to make that investment in people,” she says. “We have learned from some of our early schemes where the training was developed ad hoc. We now have a clear idea of the sorts of training that people need in different roles.”

That might be counselling skills or training in how to have difficult conversations. It might be training in benefits advice or adding a link to an online post.

“We treat volunteers like paid members of staff by putting the learning and development in to get the best out of them,” says Ms Thomas.

New volunteer services are starting all the time and a few years ago Macmillan appointed a team of regional volunteer coordinators, who recruit the right volunteers for roles.

It is important with any volunteer service to support the people who are giving their time for free. Ms Thomas argues that volunteers need an informal contract – one that spells out their commitment and what the organisation will do for them.

“You have to be really clear with volunteers about what the deal is,” she says. “We have had one or two instances where the role has been a proper, full time job, all done with the best intentions. But to be honest, if someone wanted a full-time job, they would want to be paid.”

Recruiting the right people is always important and Macmillan does have a bit of an image problem. It’s perceived as white, middle aged and middle class.

Ms Thomas acknowledges that Macmillan’s services need to reflect the people being served and that this is not always achieved.

As to whether they work, the literature is growing around this. Last year, National Voices reviewed more than 1,000 research studies on peer support and found evidence that peer support can help people feel more knowledgeable, confident and happy, and less isolated and alone.

But there was also limited understanding of what constituted peer support.

Ms Thomas argues that it is incumbent on organisations such as Macmillan to provide the evidence. “If we can show that increasing the number of volunteers reduces the number of bed days or gets people out of hospital quicker, then we will start to be taken seriously,” she says.

If the strategic purpose is now there, along with the demand, structure and investment, both to develop and support more volunteer services, the missing piece of the jigsaw too often is the health service engagement. The schemes Ms Thomas cites are all local developments and Macmillan, in common with any other innovator, is struggling with spread and uptake of the “pockets of brilliance”.

She says: “Our conversations with ministers show that they are open to this. Professionals need to shift and slowly, slowly we are making inroads.

Ms Thomas chooses her words carefully but others working in this arena say that too many professionals appear to feel threatened by volunteers and are unwilling to let go – even if it means they can hand over tasks that are not really in their remit. The lonely person who has been befriended is not as likely to visit the GP because they are lonely, for example.

The patient with benefits questions need not bother the nurse if they can get help from a volunteer.

“We have to get over this,” says Ms Thomas. “There is no doubt that medicine has to change, partly because what people want is changing.

”They do not want the old patriarchal style. They want to be involved.”

And that is what volunteering offers. In an era when one in two people will be affected by cancer and where the current 2.5 million people living with the disease will rise to 4 million, surely we really would be mad not to involve them.