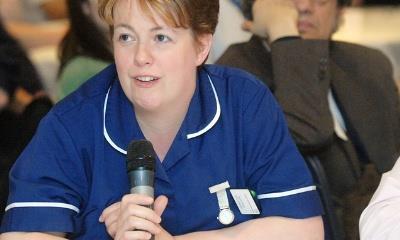 So how has the trust been so successful in creating a culture of staff engagement? According to chief executive John Adler, the rollout of the Listening into Action approach has enabled the trust to unlock an untapped resource and engage staff for the benefit of patients.

‘Listening into Action has now reached every area of the trust, including wards, clinical departments and corporate areas’

“LiA is a pioneering programme of engagement, truly embedded as the way we do things at our trust,” says Mr Adler. “Its reach spans staff in every area of the trust, patient facing and back office, and includes our new community services.

“By championing it from the top of the organisation and empowering all areas to embed the approach via a regular sponsor group, we have seen significant improvements in staff satisfaction and better services for patients.”

LiA is an outcome-oriented approach created by consultancy Optimise Limited. It is based on evidence that engaged staff deliver better care for patients. LiA is for NHS leaders who recognise that traditional ways of leading and engaging are not enough to achieve the step-changes we all want to see. It quickly mobilises people around a common mission that matters to them, builds pride and inspires spread.

Sandwell and West Birmingham was the first trust to pioneer adoption of this approach on a widespread basis as its core way of working. Twenty-five other trusts have since followed, with several more starting their own journey in the new year.

LiA positions managers as “enablers”, securing the commitment of staff, engaging with them to release their creativity and enthusiasm, and supporting them in facilitating change. It plans for sustainability from the beginning.

The programme has now reached every area of the trust, including wards, clinical departments and corporate areas, improving patient care, staff satisfaction, communication and change management.

The sponsor group chaired by the chief executive ensures crossover of ideas as different areas listen to and are inspired by the activity and improvements going on in other parts of the trust, and managers are held to account for the way they engage their staff.

The approach is also being widely used to engage patients in what really matters to them, and in setting the organisation’s priorities for the coming year.

Thousands of staff across the whole trust have now been involved, from theatres to security, medical engineering to finance, and a range of themed events have been held.

The trust has analysed staff survey trends over the four years it has been running LiA and has seen substantial change in feedback:

In putting together its entry for the HSJ Awards, the trust was able to clearly demonstrate the impact of Listening into Action in engaging staff to generate and implement many of the ideas for savings for the £20m annual cost improvement programme it is delivering.

‘We’ve used the same principle of LiA in big teams and small teams, which has ensured everyone feels included’

The programme has contributed to reduction in sickness absence and other efficiencies which have improved care while saving significant costs, and is being used to drive the trust’s transformation plan – it’s response to the quality, innovation, productivity and prevention agenda − and save £125m over five years.

Fiona Shorney, who is responsible for therapy services at the trust, said: “We’ve used the same principle of LiA in big teams and small teams, which has ensured consistency so everyone feels included in the same way. It doesn’t matter what level of staff you involve, everyone feels they’ve got the same voice.

“We’ve used it in particular for reconfiguring the way physio works at weekends. This last year has really demonstrated it works − everyone can see the benefit.”

Steve Clarke, responsible for facilities, said: “We had lots of staffing issues with morale and feeling managers weren’t listening to staff. Through LiA that has got much better. We’re now having monthly project meetings where the majority of issues are to do with how to improve the service. The problems over morale have gone.”

Mr Clarke can cite numerous other examples − patient transport, portering and retail catering − where staff came up with their own solutions to problems, saving the trust money and empowering frontline staff to make change.

Ruth Williams, one of the adult community service managers, said: “In the community we are using LiA to create a plan to support earlier discharge of patients to help close more than 100 acute hospital beds this year. We held two LiA events with 102 staff working across 15 different patient pathways.

“Through LiA, we worked with staff, GPs and commissioners to build on their ideas and implement a new integrated service which delivers a single point of access, a borough-wide admission avoidance service and three integrated locality teams.”

Mr Adler, who takes up a new role as chief executive of University Hospitals of Leicester Trust in 2013, said: “LiA has transformed our trust into an organisation where frontline staff are fully involved in improvements of all kinds, for patients and for themselves.

“It has unlocked a previously untapped resource, leveraging the talent, ideas and goodwill of our staff for the benefit of our patients.”