1
The impact of networks in supporting primary care 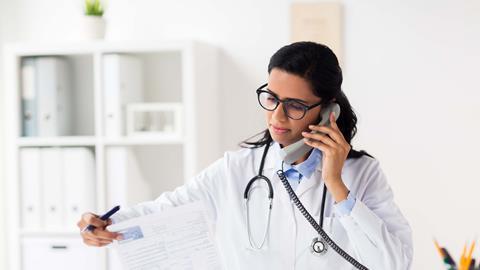 To bridge the divide between primary and secondary care, a CCG has rolled out a new advice and guidance service that gives GPs access to a national network of consultants, reports Claire Read

When Chris Duffy needs advice on a possible referral to secondary care, the Greater Manchester-based GP knows he will be able to have a phone conversation with a specialist. But he also knows the odds of that consultant working anywhere near him are slim.

That’s because Heywood, Middleton and Rochdale Clinical Commissioning Group – of which Dr Duffy is chair – have introduced a new advice and guidance service in which GPs have access to a national network of consultants.

There is, of course, national encouragement to create networks in primary care and pathology. But the example of Heywood, Middleton and Rochdale CCG perhaps give a sense of other areas in which such arrangements can play a part.

According to Dr Duffy, GPs are already reporting a positive impact. And that the initiative was driven by established need among that group is, he says, crucial to its success.

It’s fair to say networks are officially in vogue in the NHS at present. To take a look at the long-term plan – the official barometer of current favour – is to see frequent mentions of the word.

Whether in the context of primary care, pathology or imaging, the stated aim is the same: to better share workload and expertise, enabling consistently swift and appropriate care and breaking down barriers between different parts of the system.

For Chris Duffy, it’s an eminently reasonable proposition. “I think networks can solve certain problems,” says the practising GP and chair of Heywood, Middleton and Rochdale CCG. “It’s a much more sensible way of working on a bigger scale for certain things.”

But his endorsement comes with a caveat. To truly work, he believes such developments must be driven by local need and enthusiasm.

“I think networks are much more likely to be successful where the members – be it radiology departments or GP practices or whoever – come together to jointly solve a problem rather than an STP, for example, saying we must have a radiology network, or we must have a pathology network,” he argues.

“If all the people involved say, hang on, this is a problem, how can we solve it, we can’t do it by ourselves, we’ll come together and do it as a network, quid pro quo, then I think that’s more likely to be successful.”

In a recent development led by his CCG, he offers a case in point. The organisation has introduced an advice and guidance service for GPs, capitalising on a national network of specialists.

An advice service for GPs

“It originally came out of a lot of GPs bemoaning the primary and secondary care divide,” remembers Dr Duffy. “We seemed to have lost the ability to just ring up our local consultant colleagues and have a quick chat about a patient. Barriers have appeared to prevent that happening – whether formal or informal they are still there.”

Conversations with the local acute trust revealed a reluctance to provide such a service, with capacity issues possibly playing a part. And so the CCG partnered with Consultant Connect, which offers a national network of specialists willing to offer phone expertise to primary care colleagues.

When Dr Duffy or his fellow GPs feel they would benefit from a conversation with a secondary care clinician about a particular patient, they call a number and are put through to an available consultant in the relevant specialty.

“So, I recently spoke to a consultant in Yeovil,” reports Dr Duffy. “I got quick access to the advice I needed.”

Should gastroenterology advice be required, he just might find himself put through to Rex Polson. A consultant gastroenterologist at University Hospitals Birmingham Foundation Trust, Dr Polson has offered phone advice and support to his local GP colleagues for some time via Consultant Connect.

But he’s now part of the national network as well, and so supporting more primary care colleagues across the country.

“I feel if I can help the GP, then it’s a good thing – it’s better for the patient,” he reports. “If they have a question and are faced with: ‘Should I make a referral, do I send a letter?’, picking up the telephone and speaking to somebody has got to be easier.”

A lot of the drive behind us using Consultant Connect is how do we make sure we get appropriate patients going to outpatients or being admitted – it’s quality driven, and hopefully a financial benefit follows

“Occasionally there will be a patient who I think will merit a two-week wait referral. And that isn’t a failed call to me; that is equally helpful for the patient and the GP.”

It’s a point echoed by Dr Duffy from Heywood, Middleton and Rochdale CCG. “A lot of the drive behind us using Consultant Connect is how do we make sure we get appropriate patients going to outpatients or being admitted – it’s quality driven, and hopefully a financial benefit follows.”

The suggestion is that, so far, GPs believe it’s making a difference. “We have a members’ development session every four months, where we get all the practices together. And there was a lot of positive feedback from practices and GPs within the group who’d actually used the service.”

Dr Duffy says the CCG will now be offering more specialties via the service. The success perhaps further reinforces his reflections on networks: they work best when there is a genuine desire to see them implemented rather than when they are simply imposed.

“Generally, if you’re signed up to something then you’re going to work to make it work. Whereas if it’s imposed, it’s best you be enthusiastic, but apathy will stop everything developing. If you’re apathetic, then nothing’s going to change because you’re not going to join in.”