7
Patient safety will improve only through dialogue
Supplement Archive

Patient safety will improve only through dialogue 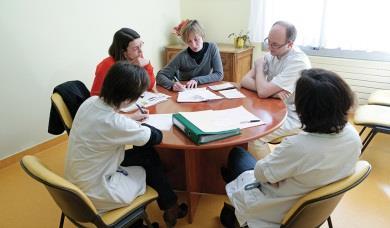 Mike Straw has spent the past 20 years working with private sector organisations to bring about change and transformation. Ask him how he does it and he talks of focusing on the mindsets and attitudes of those leading and working within an organisation. It is these, he suggests, which determine behaviour.

Yet at a time when the NHS is being asked to deliver more than ever before - safe, top-quality patient care on limited resources − he fears its leaders and managers are ill equipped to change those mindsets.

“People are in survival mode,” argues the managing director of Achieve Breakthrough, a business change consultancy which is working with increasing numbers of NHS clients. “And when we’re in survival, we feel compromised. At the middle management level, everyone is feeling under pressure, having to do more with less.

‘When people feel threatened, they’re not at their most creative’

“They’re told to work harder, faster, quicker, smarter, more creatively but don’t make any mistakes. And that’s a really, really tough ask because when people feel threatened, as they do at the moment, they’re not at their most creative.”

None of which is to say that the NHS is not trying to change.

“Everyone is working desperately hard to change structures, to change processes, to do all of these things,” says Mr Straw. “But what they run up against is the existing attitudes and behaviours. Inherently, this type of problem cannot be solved with the same level of thinking.

“It needs a breakthrough in people’s thinking and acting to bring about change. For that to happen, people’s potential needs to be unlocked, and leaders and managers who have the ability to do this are rare.”

Most dysfunctional meeting ever

As the holder of a master’s degree in organisational development, the chief executive of Hull and East Yorkshire Hospitals Trust is perhaps more sensitive than most to this line of argument.

When Phil Morley joined the organisation two years ago, it had one of the worst mortality rates in the country and was failing on a series of other measures. His work to address those problems soon involved a concerted effort to change the way in which his staff talked about and approached challenges.

How necessary this was became clear when, during his first fortnight at the trust, he sat in what he describes as the most dysfunctional meeting he has ever attended, listening to people shouting over one another to share opinions.

“What makes human beings think the way they think is all about the language you use, the quality and quantity of conversations that people have,” he argues.

“So if you want to start changing people’s behaviours you have to start changing the way they talk, the language they use, the quality of the conversations they have, the opportunity to have dialogue rather than discussion.”

He says sessions with staff from Achieve Breakthrough brought about that change in dialogue. “A really good example is that when I came to the trust, when mortality was so poor, we had a mortality monitoring committee. We changed it into a mortality reduction committee.

“Even by changing that conversation, people then feel this is our role here. It sounds really silly but just moving from mortality monitoring to mortality reduction made people think yes, we’ve been great at monitoring it, but we haven’t reduced it.”

That is no longer the case. In 18 months, the trust’s standardised mortality rate has fallen from a significantly above average 117 to within the normal range. Mr Morley says the improved dialogue between staff and renewed focus on the organisation’s aims played an important role in that improvement performance. The trust’s chief of workforce and organisational development agrees.

“It’s really pulling a team of people together to focus on what they all agree are the common goals,” says Jayne Adamson. “There’s nothing particularly magical in this other than you’re dealing with what’s stopping people doing that normally.”

Two years ago, Hull and East Yorkshire Hospitals was 168th out of 168 on yearly mortality rates. It was far from the only area in which performance was poor. “Most of our measures would have been red if you were going to RAG-rate them,” reports chief of workforce and organisational development Jayne Adamson.

Yet at the beginning of April 2013, the organisation was shortlisted for a Patient Safety Award. It is recognition of a dramatic turnaround - moving to 79th on mortality, reducing C. Difficile infections by 50 per cent, reducing the number of cardiac arrest calls by more than 50 per cent, cutting the pressure ulcer rate by 40 per cent and falls by 25.

The award category in which the trust has been shortlisted is revealing: changing culture. For while the turnaround started with a restructuring - four health groups headed by what the trust refers to as a triumvirate of a medical director, a nursing director and an operational director - it was made possible by work to open up dialogue between those working in the organisation, confront frustrations, and work towards real change.

That process was aided by Achieve Breakthrough, which has developed the organisation’s leaders and managers as part of a culture change programme.

“Up to that point, medicine worked in medicine and surgery worked in surgery and our clinical support services were supporting them but very separately; the same with family and women’s,” explains Ms Adamson.

“Now Health Groups United run their own transformation board. They looked at our C Difficile rates and we put a cohort ward in place and other measures and managed the rate down on the back of that. It’s also impacted the work that we are doing on mortality because we were working together. The Health Groups United part was a real catalyst, I think.”

“This is the kind of work we’ve been doing,” continues Phil Morley. “It’s not just been sitting in a room and saying nice words to each other. It’s all been with the purpose of improving outcomes for patients.”

Alex Small on the power of fresh thinking

Making businesses fly beyond their wildest dreams has been the day job for Achieve Breakthrough for the last 10 years. We are devoted to bringing about powerful, lasting change in the organisations with which we work, be they private sector firms like AstraZeneca and Novartis or public sector organisations like Royal Berkshire Foundation Trust or Hull and East Yorkshire Hospitals.

It is interesting that while many people perceive there to be a giant rift between the private and public sectors, many of the challenges they face are not so far apart. Doing more with less, being more creative and innovative, driving down cost while raising productivity… in the current climate, they all sound familiar regardless of the side on which you stand.

While many organisations spend vast amounts of time focusing on tweaking processes and systems, it is the development of people and their way of thinking that brings about the biggest shifts in performance and output.

NHS trusts are perfect examples of organisations where breakthrough thinking is having a profound effect on people’s ability to transform their attitudes in the face of certain change. In so doing, new perspectives are created and, with them, a fresh approach to surmounting day to day challenges.

In today’s NHS, those daily challenges are of course considerable ones: an ageing population, funding cuts, the scrutiny resulting from the Francis Report, the fundamental reorganisation of the health service. All will require staff to challenge the habitual ways of doing things. Doing that will require a change in the mindsets and attitudes that created those habits in the first place.

At Achieve Breakthrough, we work with organisations to bring about just that kind of transformation in thinking. By supporting and consulting with senior and middle level managers, we help change the context in which they are operating.

We look not at processes but at people’s realities - we see our work as the equivalent of changing the water that is in a fish tank rather than the ornaments around which the fish are swimming. Our experience shows that it is the only way in which true, lasting transformation can be created.

We are always very happy to speak to anyone interested in learning more about our approach and our methodology, and how it can support fundamental change in an organisation. In the first instance, call Alex Small on 01225 852 863 or email alex@achievebreakthrough.com