The successful example of people power NHS Change Day represents has the potential to change the face of healthcare reform as we know it, writes Damian Roland 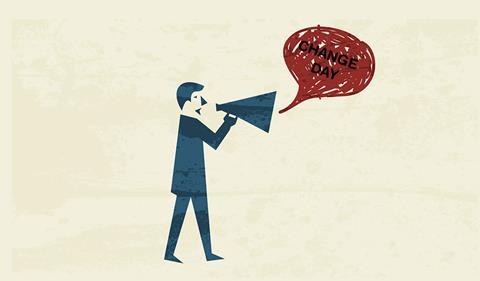 Talk of radical change in the NHS is never far away.

Nearly three years after Sir David Nicholson famously joked that the government’s reform package was “so big, you can see it from space” the volume of the debate may have died down a little.

But as the next election approaches and the health battle lines are redrawn, we can rest assured the noise will once again be cranked up by politicians and interest groups on all sides.

However, a movement that could eventually do more to improve NHS services than a lot of initiatives in the past is NHS Change Day.

It all started as a seed of an idea in 2012. A group of young doctors on a leadership course got talking about the frustrations of driving change from within the bureaucratic beast that is the NHS.

The conversation moved to the social media airwaves and from there it grew into a virtual debate that began to draw in a generation of young, energetic, activist NHS staff.

These emerging leaders – brought up on a diet of online discussion forums, instant responses and quick results – began to realise there was something they could do after all.

They hit upon the concept of “pledging”: making a public promise on one day of the year that they would do one small thing to improve care in their area.

It is such a simple idea and we’re all still amazed by the effect it had.

The energy grassroots staff have to improve the services they provide on a daily basis is incredible, but the truth is that many feel they do not have the opportunity to do anything about it.

Looking back I think we just tapped into a desire that was already there and found a way for people to release it.

Change Day asked them to take it upon themselves to come up with their own ideas for improvement. These may have been small, large, in a group or on their own, but what Change Day unleashed was “collective permission” for people to throw away the traditional NHS notion that change can only happen if it’s been sanctioned by someone else.

By March 2013, NHS Change Day had registered nearly 200,000 pledges from all parts of the NHS and social care.

My pledge was to try the medicines I was prescribing to my young patients to see if the taste could be improved.

There were many others including reception staff pledging to greet every patient with a winning smile and GPs turning off electronic displays and instead venturing out to collect patients personally from the waiting room.

Pollyanna Jones, regulatory performance manager at King’s College Hospital Foundation Trust and one of the early pioneers of the movement, says: “Looking back, the power of Change Day turned out not to be the pledges themselves. It was more about what the pledges stood for.

“On the face of it a single pledge isn’t going to change anything. But when many thousands of people make a public declaration to do something it creates a momentum of its own.

“Staff were motivated by a common call to action and a realisation that they weren’t alone in feeling frustrated by some of the bureaucratic processes within large NHS bodies.

“By encouraging this collective will, and by harnessing its potential we have a real chance to give a voice to the people who, more than any politician, are capable of revolutionising NHS services.”

Among those bitten by the Change Day bug last year was Louise Towse, then a mature nursing student working at York Teaching Hospital Foundation Trust.

She used Change Day as a launch pad to try something that had been eating away at her since she gave up her first nursing degree 10 years previously to start a family.

“I found myself as a mature nursing student, who had loads of first-hand experience of using the NHS, and it occurred to me that we weren’t getting enough ‘real’ experience of what it feels like to be a patient,” she said.

“Change Day was my opportunity to try and do something about that. It gave me the courage to try something different.”

Louise‘s resulting pledge led to the introduction of a mock ward, designed to give trainee nurses first-hand experience of care from the patient’s perspective – a scheme that has the potential be rolled out nationally.

The ability of Change Day to reach the staff groups that the NHS has traditionally found it most difficult to engage is just one of the things that makes it stand out from traditional attempts at widespread system reform.

“I’ve got involved because it just feels different from any sort of change programme I’d heard about before,” says Thuvarahan Amuthalingam, a fourth year medical student at Barts Health Trust.

“There’s no shortage of service improvement projects everywhere you look, but the vast majority of them seem to be pushing downwards. There just doesn’t seem to be enough emphasis on the younger generation showing what they think can be done differently and then having the opportunity to demonstrate their ideas.

“Change Day gives us the freedom to do this. We can be a bit experimental and hopefully then show the real positive impacts that are needed for other people to buy in to doing things differently.”

For many who were involved in Change Day 2013, having a recognised reason to “swim against the tide” without fear of being judged proved a powerful motivator.

It even persuaded some, like graduate trainee Molly Kavanagh, to use skills picked up in student politics to drive change within her own organisation.

She is of the view that people who have worked in the service for many years perceive lots of invisible barriers to doing things differently. However, these obstacles can sometimes turn out to be imaginary when seen through fresh eyes.

“There’s an ingrained view that you do things a certain way and a reluctance to raise an issue or idea with someone above your head,” she said.

“Maybe it’s because I don’t have that baggage yet, but I’m able to use Change Day to tell people that there’s no reason at all why they can’t pick up the phone to their chief executive and suggest an idea. And if they don’t believe me I’m happy to show them.”

Inevitably as we move further into 2014, the debate about the future of the NHS will once again rear its head.

The usual buzz phrases – operational pressures, financial disincentives, cultural and leadership challenges – will be bandied around in newsrooms and TV studios.

Change the face of reform

However, people power has raised its head in the NHS. Huge numbers of staff have demonstrated that they are both willing and able to take on the improvement agenda.

The genie is well and truly out of the bottle and it will take a brave or foolish politician to ignore it.

The aim this year is to log 500,000 improvement pledges. It Is a bold target but we believe it is well within our grasp.

Half a million people – over a third of the NHS workforce – are making a public declaration to improve one aspect of care.

It’s a powerful vision, and one that has the potential to change the face of public sector reform as we know it.