How should healthcare professionals respond to patient and carer requests for multiple auto-injectors? Bedfordshire CCG has thought hard about its answer 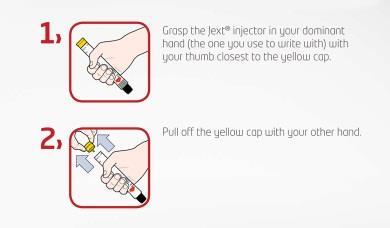 Moving to a new type of auto-injector device gave Fiona Garnett the chance to address an area of anaphylaxis provision which had worried her.

“I get concerned because parents and carers request a number of auto-injectors. A typical example is: ‘I need eight injectors, please − two at Grandma’s, two at home, two at school, and two at the childminder’,” reports Ms Garnett, pharmaceutical adviser at Bedfordshire Clinical Commissioning Group.

“I always want to point out that your child doesn’t stop having an allergy when not at one of those places. We shouldn’t be prescribing people eight injectors and then encouraging them to leave them lying around. People need to understand the importance of carrying the devices. Not everyone takes anaphylaxis seriously and actually carries the auto-injectors. And it worries me.”

Personal experience means that Ms Garnett has never underestimated the seriousness of severe allergies. She still vividly remembers a time, many years ago, when she was confronted with the reality of anaphylactic shock.

“I was living in the north of England at the time and walking around the walls in Berwick-upon-Tweed and a gentleman came up to me gasping for breath − he’d had a bee sting,” she says. “He had the auto-injector in his hand but he was in such a state he couldn’t use it. So I’ve actually administered one. And imagine where Berwick-upon-Tweed is − the time waiting for the ambulance to arrive. It’s a very scary thing.”

Bedfordshire may not be quite as isolated as Berwick, but it does have some rural areas where it would be difficult for an ambulance to reach a patient within five to 10 minutes. It is one of the many reasons that Bedfordshire has now issued guidance saying that all patients should be given just two devices.

“Effectively the policy is that the minimum and maximum number of injectors a patient should have is two,” Ms Garnett says. “We recommend one to be given immediately in the event of an anaphylactic reaction, and one five to 20 minutes later if there fails to be a response.”

There are some exceptions. “If somebody is very obese, they may need more devices, and the same if somebody is in a very rural area. And obviously there may be certain exceptions such as young children. It would be inappropriate to give a three-year-old a pen to take to nursery − clearly the nursery has to have their own.

“But our main aim is to really underline the importance of patients carrying them.”

In so doing, requests for multiple devices should decrease − or not be honoured when they are made - which should mean reduced wastage and lower costs. Getting across the importance of carrying the devices will also mean less risk for sufferers of severe allergy.

Of course the real hope is the treatment will never be needed. “We’re spending taxpayers’ money on something we hope is going to go in the drugs bin,” says Ms Garnett. “We don’t want to waste excessive money. But equally we want to protect patients.”

“Bizarrely, quite often the message we’re delivering is how to avoid having to use the Jext auto-injectors,” explains Steve Ogram, key account manager at ALK-Abelló.