Jim Mackey has admitted NHS trusts will miss their financial target in 2016-17, after provider forecasts indicated the year-end deficit will be £280m worse than predicted three months ago.

The deteriorating position, revealed through figures obtained directly from trusts by HSJ, suggests a year-end sector deficit around £970m, which would significantly breach the maximum £580m deficit “control total” set by national leaders. 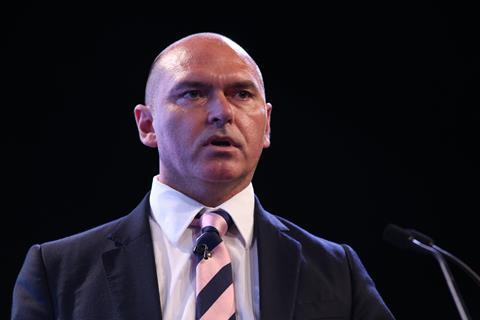 ‘We need to all work as hard as we can to keep the deficit as low as possible,’ Jim Mackey said

The numbers were those submitted for quarter three of 2016-17 to NHS Improvement, which is due to publish the sector’s official position next week.

HSJ collected forecast figures from all but five of England’s 237 NHS trusts, via public board reports and direct requests. They suggested the year-end forecast was £280m worse than the previous £690m official deficit forecast published in November.

However, it is understood the regulator has since managed to improve a number of the forecasts following discussions with trust boards. It is not yet clear to what extent the overall forecast has been reduced, or by what means.

Mr Mackey, the NHS Improvement chief executive, told HSJ: “We’ll not hit £580m and I think it’s about containing this to as manageable a number as we can. Ever since quarter two we’ve not really expected to hit that number. We need to all work as hard as we can to keep it as low as possible.”

Trusts’ quarterly forecasts are seen by the NHS’s senior leaders as the most important indicator of whether efforts to reduce the provider sector deficit, such as last July’s “reset”, are proving successful.

The numbers submitted by trusts will likely alarm officials at the Department of Health and Treasury, as they threaten to exceed the £800m of NHS funding that has been set aside as a “risk reserve” in case of trusts overspending.

Mr Mackey said he is confident the deficit can still be limited to within the £800m.

HSJ understands more providers will be placed in financial special measures as a result of deteriorations in their position, once the official figures are published.

Around 40 trusts have reported significant deteriorations compared to their quarter two forecast, with 12 of these each coming to more than £10m.

HSJ has also identified examples of where trusts have gone through formal protocols to adjust their forecast downwards, but have then revised them back upwards following discussions with NHS Improvement.

For example, in its board papers Royal Liverpool and Broadgreen University Hospitals Trust reported an underlying deterioration of £15m, but then told HSJ the position had been revised back to its planned surplus following subsequent discussions, including with the regulator.

This will be largely achieved via additional income from commissioners, as well as a capital to revenue transfer.

Although improvements secured through additional income will help the provider sector reduce its deficit, it will have the opposite effect on clinical commissioning groups. The projected overspend by CCGs has almost doubled in the last three months.

Extra income for trusts is neutral in terms of the DH’s revenue position as this includes the performance of both trusts and CCGs. The DH is likely to come close to breaching its spending limit again in 2016-17, especially if the provider deficit is larger than £800m.

Responding to HSJ’s research, Richard Murray, policy director at the King’s Fund, said: “There were risks that the better financial performance among NHS providers seen in the first quarters of 2016-17 might slip over the year, and these risks appear to be materialising.

“With performance challenges rising in the NHS in January, trust finances may yet deteriorate further. With the forecast provider deficit rising past the £800m risk reserve top-sliced from commissioners at the start of the year, the ability of the DH to live within its overall budget is once again in question.”

In 2015-16 the provider sector deficit was officially reported as £2.45bn, though various technical accounting measures had been deployed to bring this down from an underlying position of around £3.7bn.

Since then the sector has benefitted from the £1.8bn “sustainability and transformation fund”, as well as a change in the national payment tariff which delivers more income from commissioners.

In July’s financial “reset”, the combined financial plans for NHS trusts set a planned deficit of £580m for 2016-17, after accounting for the £1.8bn STF.

NHS Improvement and NHS England subsequently said actions had been taken to ensure the deficit was “no more” than £580m, but stressed the aim of reducing the deficit to £250m.

Meanwhile, two-year planning guidance issued by the regulators has said a failure to meet the £250m target and enter 2017-18 in “run-rate balance” would require an additional efficiency requirement for trusts next year. The figures collected by HSJ suggest this additional requirement could total around £970m.

Discounting STF, the forecast figures suggest a year-end forecast of £2.77bn. Although this is worse than the £2.45bn reported last year, there may well be further one-off accounting measures and additional income deployed to bring the figure down. This would support this year’s position, but is unlikely to make next year’s challenge any easier.