Public support has strengthened in favour of junior doctors, with an increase in those strongly supporting yesterday’s strike compared to the one in January.

”Doctors risk losing trust at a time when public scepticism has grown in so many other areas,” The Independent claimed ahead of the first junior doctors strike in January. The Times also gave similar warnings on the day of the January strike. 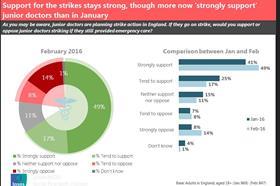 From 8am yesterday to 8am this morning junior doctors enacted industrial action over changes to their contract, and they took to the picket lines with a public backing that appears to be unwavering. 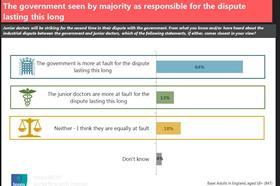 Our poll for HSJ found that as many support the junior doctors now as did in January (66 per cent) and that, in fact, the numbers strongly supporting the doctors have increased by eight percentage points. Support seems, then, to have strengthened.

However, we have also seen a very marginal increase in the number opposing the junior doctors, and a six percentage point increase in those strongly opposing the strikes. This shows a polarisation and hardening of views in this debate, as the number not willing to express an opinion decreases.

So where is this decline in trust that pundits forecast? If they had been right, we might have expected support to have declined slightly.

However, this is not what has happened. As views polarise, there appears to be no crack in the resolve of those supporting the junior doctors.

If we are to understand why this might be the case, then it is important to understand where the blame lies: nearly two thirds of people think that the government is at fault for the dispute lasting as long as it has.

If the doctors were seen as prolonging the negotiations needlessly, we might see a decline in support, but this is not the case.

Perhaps one reason for this is public understanding of why the doctors are striking in the first place. We saw in January that people were more likely to think that they were striking because of long working hours and working conditions, as opposed to political reasons or disagreement over a seven-day NHS.

However, we also know that trust in doctors is unparalleled and it would be difficult for the government to maintain control over the terms of any debate where people trust the other side so greatly. Our veracity index – a measure of public trust in different professions – has long held that doctors are the individuals in society we trust most to tell the truth.

The latest index, held just before the first strike, reinforces the lead that doctors have had over other professions. Nearly nine in 10 trust doctors to tell the truth, compared with eight in 10 trusting scientists, half trusting NHS managers and just 22 per cent trusting what government ministers say (it’s 53 per cent for pollsters, in case you were interested).

So, in thinking about why support for the doctors has held up so well, it’s worth remembering these differences. When the average person is deciding whose facts and figures to take on board, they are more likely to believe what doctors say above anyone else.

And of course, trust and support are not the same; some of those people who trust doctors may very well also oppose the strikes. The confusion between trust and support might explain where the proclaimers of a decline in trust appear to have gone wrong.

Maybe, the high level of trust in doctors is not at risk from the strikes, rather this trust is one of the legs on which public support for the doctors stands.